With the collaboration of

Our world faces a tragic reality. Visions of peace, human solidarity, and affirmation of expressions of human dignity are common to most religions yet religions have been instrumentalized as means to some of the worst atrocities in human history. Recovering and living according to the best of faiths can be promising to overcome the worst of religion.

Contrary to the exhortation to no coercion in religion matters, present in all monotheistic religions, the adoption of the dignity of difference has not been the norm. Religious intolerance instead has punctuated human history. In every region of the world hegemonic impulses have as per practice overridden the virtues of tolerance, and acceptance of the humanity of others who believe differently. They have divided the one human family into feudal hostile camps, in the name of deeply held convictions used to discriminate.

The future can be different based on principles of humanity, dignity, solidarity and responsibility to save lives, improve human conditions to descent living conditions.

The conference entitled “Religions, Human Solidarity and Global Peace: Building a Better Future,” will explore how the human family can reach a better place in human relations. Religious leaders, experts, academics, and dignitaries in several disciplines and responsibilities will contribute to show how respect, valuing of other peoples’ worth can transform hostilities and proxy and open wars into collaboration, partnership, and mutual respect.

Religions have been historically used to promote violence. It does not have to continue this way uncontested. Religious leaders and people of influence have a historic opportunity to contribute to abolish the misuse of religious teachings to promote hatred, violence, and desecration of human sanctity.

It is easy to give in to fear before the unknown. It is therefore crucial that we get to know each other's religion. Religious leaders can play a key role to foster understanding and adoption of common policies for a brighter future. This is what makes gatherings like this conference vitally important.

The Peres Academic Center, The International Association for the Defense of Religious Liberty (AIDLR), The International Religious Liberty Association (IRLA) and The Hebrew University of Jerusalem conference is dedicated to exploring the imperatives of Peace, solidarity, and Human Dignity from the perspectives of each monotheistic religion. The overarching goal is to share with the international community with guidelines from which plans of action will be developed and implemented by people of good will from each religious tradition. Thought leaders are invited to impact our world in facing the tragic reality of human suffering, division and violence and instead partner to foster peaceful coexistence and constructive relationships.

Provided that the health crisis of Covid 19 allows, the conference is scheduled to take place from May 23-25, 2022 in Rehovot and Jerusalem.


Relevant documents and resources related to the Event 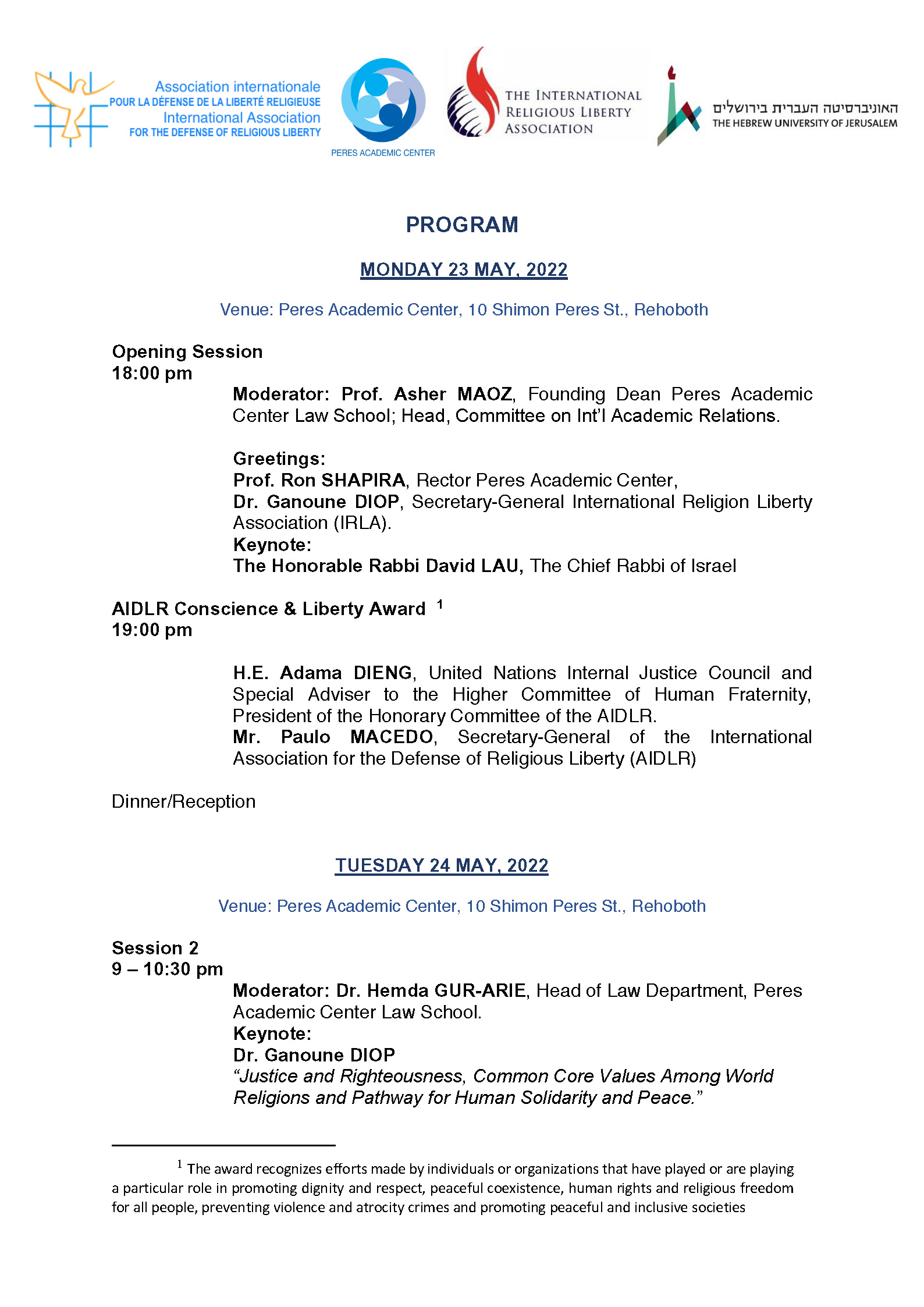 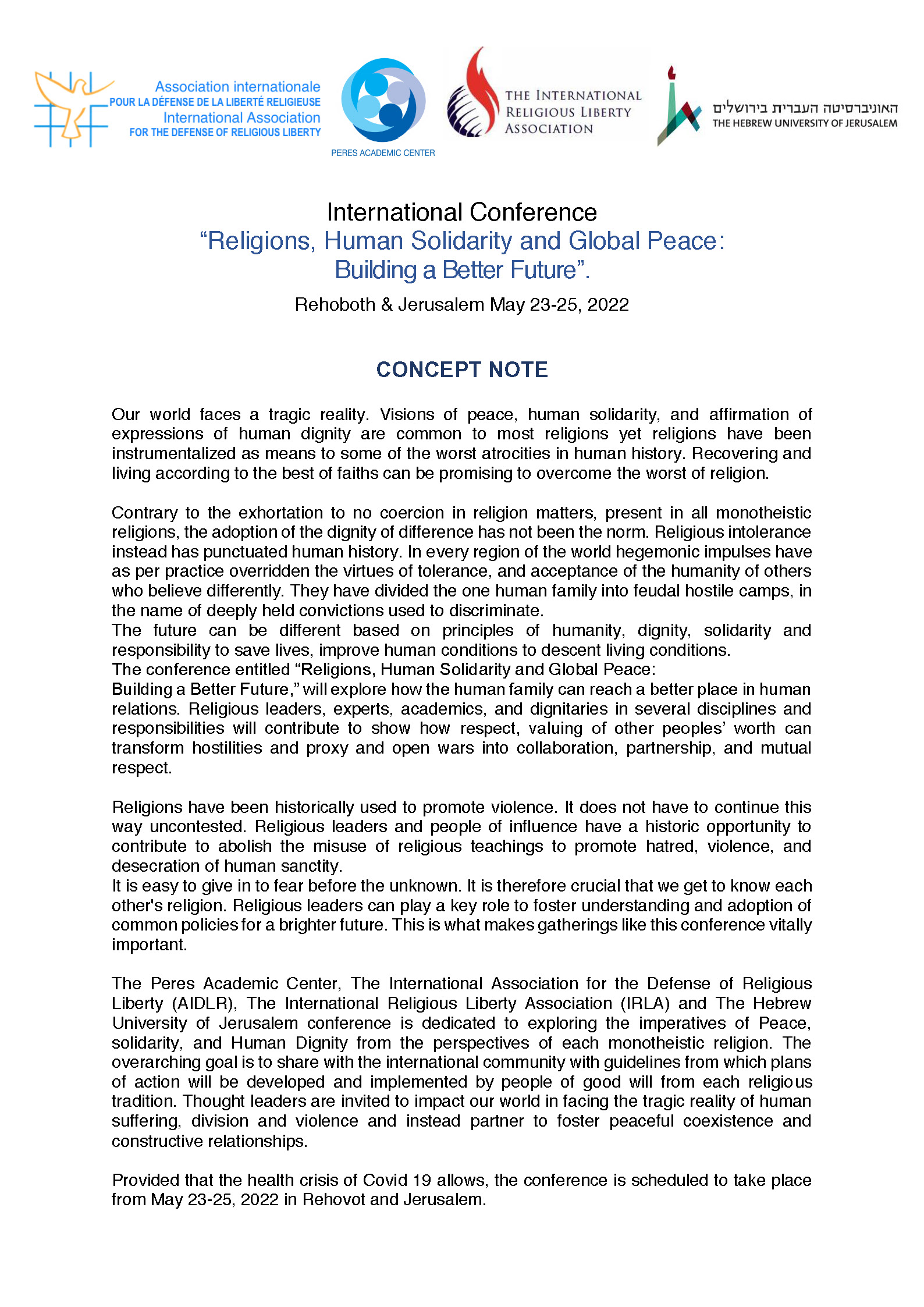 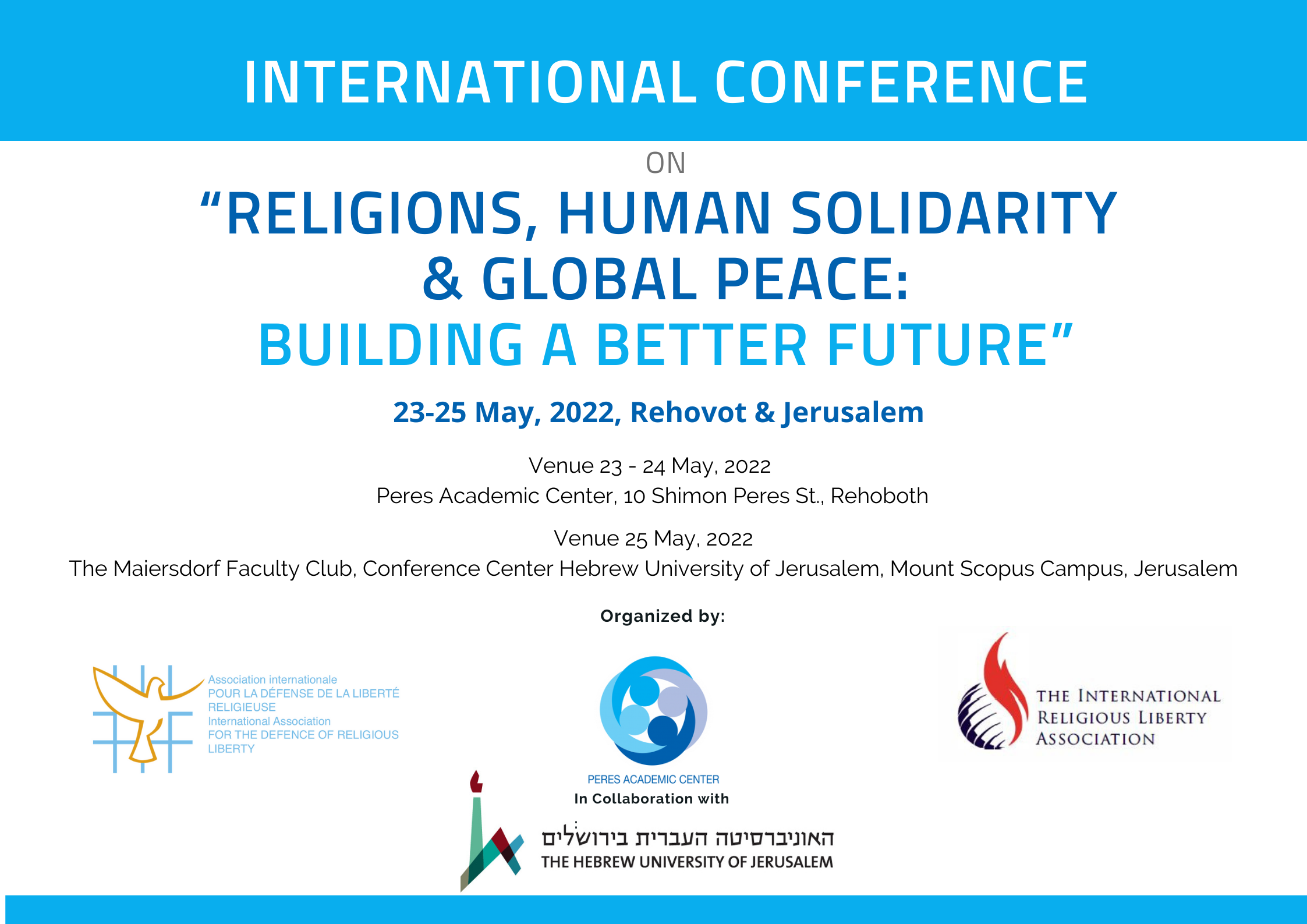 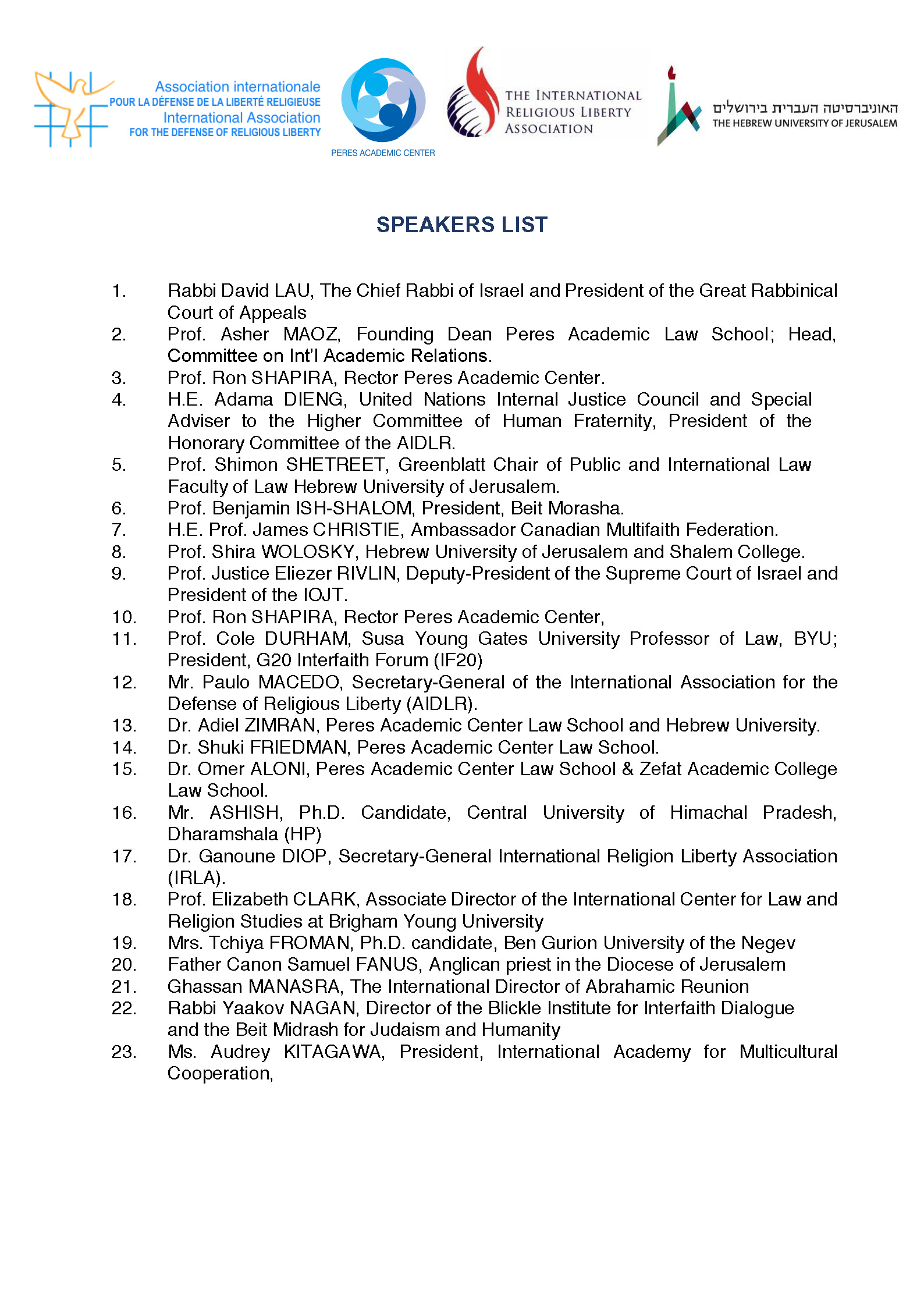 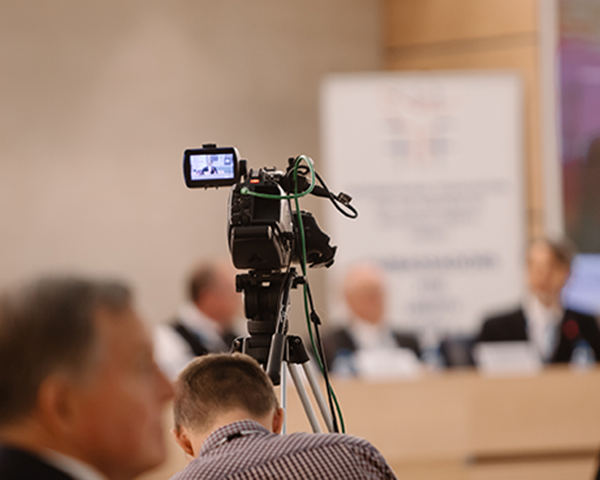 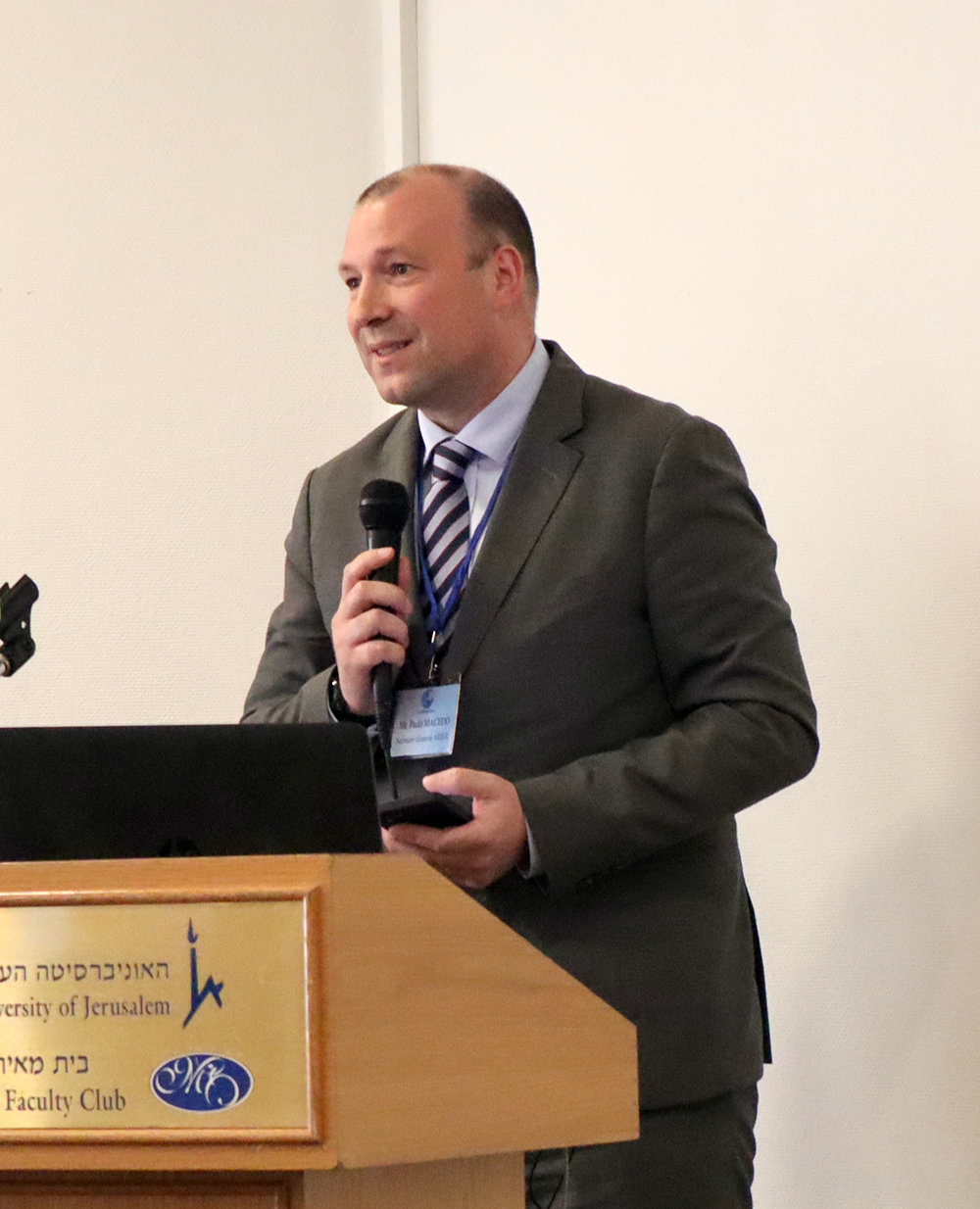