«Human rights are an essentialcomponent of human protection, the responsability to protect populations by preventing genocide, war crimes, crimes against humanity and ethnic cleansing.» 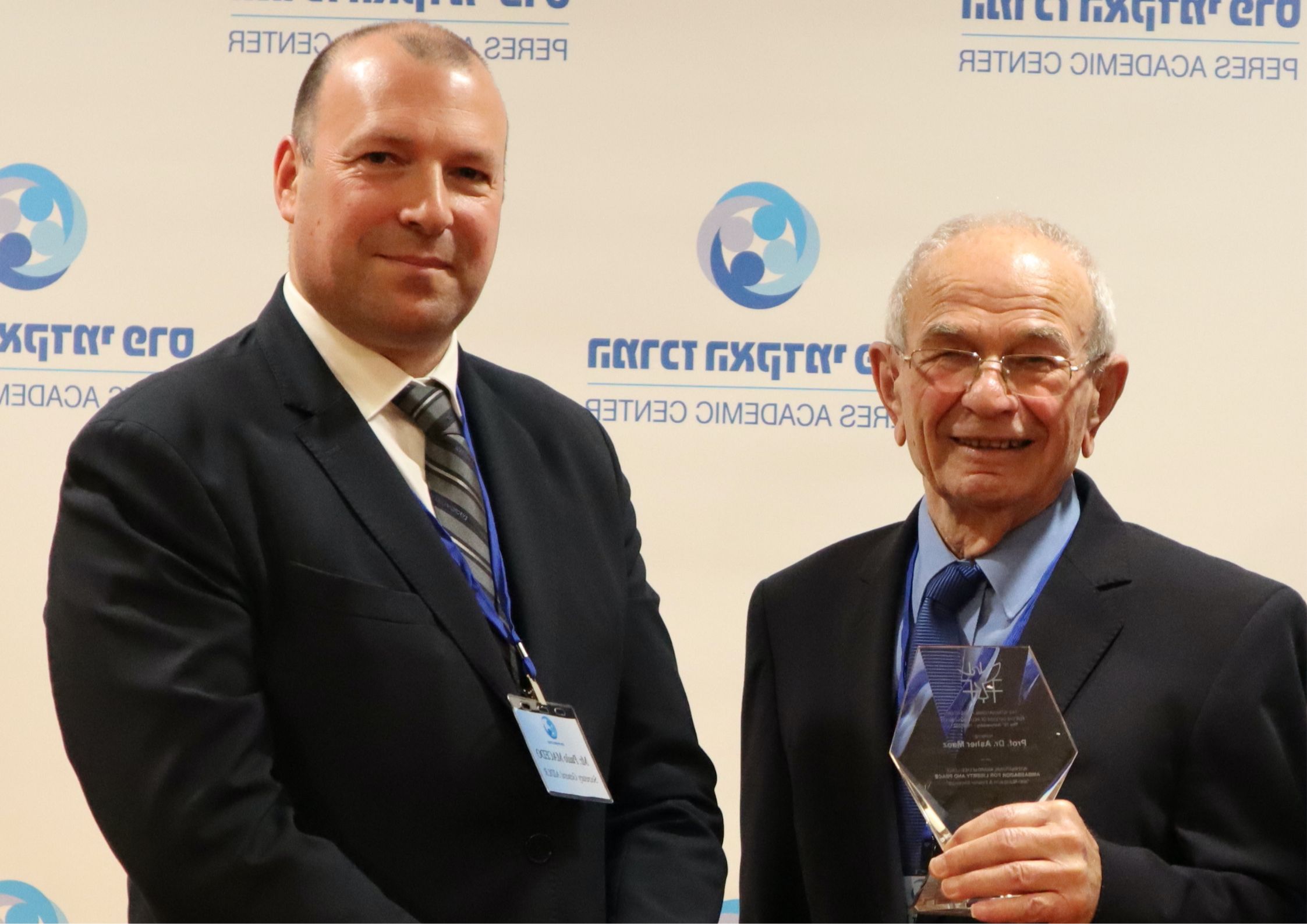 Prof. Asher Maoz holding the Ambassadors for Freedom and Hope Award, and our SG, Mr. Paulo Macedo, during the Award Ceremony at the International Conference held at Peres Academic Center in Rehovot, Israel. 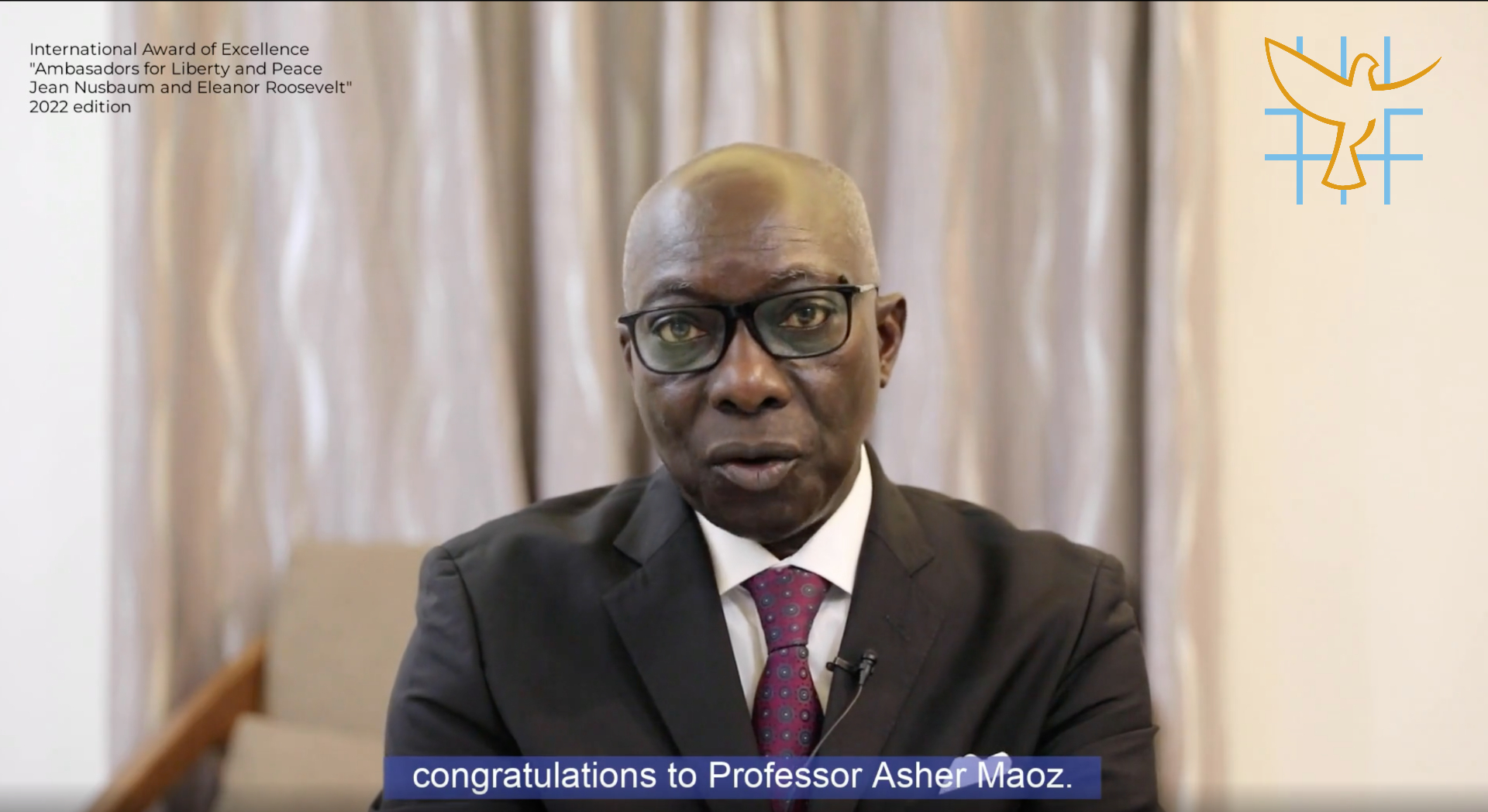 H.E. Mr. Adama Dieng during his speech at the presentation of the International Award for Excellence «Ambassador for Freedom and Peace, Dr. Jean Nussbaum & Ms. Eleanor Roosevelt» to Prof. Asher Maoz, broadcast by video conference.

Speech by the AIDLR Secretary-General at the International Award of Excellence "Ambassador for Liberty and peace, Dr. Jean Nussbaum & Ms. Eleanor Roosevelt"

Your Excellency, the Rector of Peres Academy, thank you for hosting us, for receiving us here this afternoon.

May peace be upon you.
Please allow me to start with a few words, a few remarks about the International Association for the Defense of Religious Liberty, an organisation born in 1946.

The second part of the 1940s decade was an error with some remarkable events related to peace, to Justice, and to Freedom, the chart of the Atlantic, for example, the Universal Declaration on Human Rights, The foundation of the United Nations, and, of course, the official establishment of the State of Israel.

Jean Nussbaum, a medical doctor of Swiss French origin, had been quite impressed by the lack of respect for freedom of conscience, worship and religion during the first world war and from then on. He devoted his entire life to that cause defending religious liberty.
In 1945, he mets Ms.Eleanor Roosevelt in San Francisco at the first meeting of the United Nations convention and received Ms. Roosevelt support to the development of an Association to defend and to promote religious liberty.

One year later, Dr. Nussbaum founded the International Association for the Defense of Religious Liberty, the acronym is AIDLR in French.
The AIDLR has now its headquarters in Bern, Switzerland and an office in Brussels, Belgium. Since 2016, on its 70th anniversary, the Association has promoted an award that is called International Award of Excellence "Ambassador for Liberty and peace, Dr. Jean Nussbaum & Ms. Eleanor Roosevelt". It is the special Award that is being given today to Professor Asher Maoz who is vice president of the Honorary Committee of AIDLR.

To present this award we would like to show a video sent by His Excellency Mr. Adama Dieng, the President of the Honorary Committee of AIDLR, Mr. Dieng who is the former United Nations, Under Secretary-General, and Special Advisor of the Secretary-General on the prevention of Genocide, is presently serving as special adviser to the International Criminal Court. Mr. Dieng unfortunately could not attend this Conference in person, for being at the celebration of the 20th, anniversary of the independence of East Timor, at the same time, the inauguration of the Presidency of the elected President, Nobel Prize Jose Ramos Horta.

I appreciate very much the honor you have bestowed upon me, I am proud to belong to the Association established, as you have said, by Dr. Jean Nussbaum and Mrs. Eleonor Roosevelt and led today by President Mario Brito who is a good friend of ours, people know he has been here, and he will be at our next Conference. and Paulo Macedo, Secretary General.

I am especially proud to receive the award from Adama Dieng. Adama joins a distinguished line of Honorary Presidents that begins with Eleanor Roosevelt herself and continues the role with the likes of Albert Schweitzer, René Cassin, Léopold Sédar Senghor and others. So, I thank you sincerely Paulo, and please pass on my thanks to Mr. Mario Brito, we all miss him here.

Paulo Macedo, Secretary-General, I'm especially proud to receive the award from Adama Dieng, Adama joins a distinguished line of Honorary Presidents starting with Eleanor Roosevelt herself and continued the role with such personalities as Albert Schweitzer, René Cassin, Léopold Sédar Senghor, and others.

So, I sincerely thank you Paulo, and please, pass my thanks to Mr. Mario Brito, we all miss him here.


Video of the 2022 Awards Ceremony